Ross Barnett was born in Standing Pine, Mississippi. He served in the US Army during the First World War. He was the youngest of 10 children. He was a prominent Dixiecrat and before the enrollment of James Meredith, Governor Barnett imprisoned Freedom Riders in 1961 and brutalized the Riders. Barnett was a staunch segregationist and would not allow any kind of integration anywhere within the state. He stepped into the limelight in 1962 when James Meredith would try to enroll at his alma mater the University of Mississippi. Barnett would continue his integration acts. In 1963 he attempted stopping the Mississippi State University basketball team from traveling to play in an NCAA tournament game against Loyola. The team would play but would lose to Loyola. He was also very anti-republican is his political views. In the '64 election he wanted the people of the state to "push out the Republican threat" and added that he was "fed up with these fence-riding, pussy-footing, snow digging Yankee Republicans". This was said in response to the northerners coming to Mississippi.

Barnett's personal role at Ole Miss was that he was one of the primary antagonists. He himself was there to deny entrance when Meredith came to register for classes. Barnett was fined $10,000 for his actions and was charged with contempt. The charge and fine would be terminated however. The night before the riots, Governor Barnett attended the Ole Miss-Kentucky football game. At halftime a large Confederate flag was unveiled at midfield and the crowd began to chant "We Want Ross". Governor Barnett would answer their calls and gave a famous 16-word speech. "I love Mississippi! I love her people! Our customs. I love and respect our heritage." This sent the crowd into a frenzy. Ole Miss would go on to win. After the events on September 30, 1962, Governor Barnett's political career began to crumble. He was ousted in 1964 and was expected to run for president against Lyndon B. Johnson (R) but declined and gave Alabama Governor George Wallace the opportunity to try and take the helm of the Dixiecrats. Barnett would run again for Governor in 1967 but finished a distant fourth. Barnett would return to law and fade from the public eye. When asked about the past and what he would do differently he replied with "Generally speaking, I'd do the same things again." 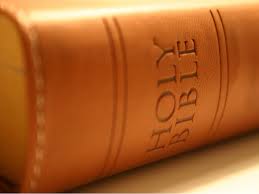 Barnett explained that segregation came from God. "The Good Lord was the original segregationist. He put the black man in Africa...He made us white because he wanted us white, and He intended that we should stay that way." 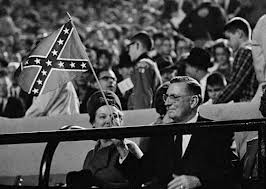 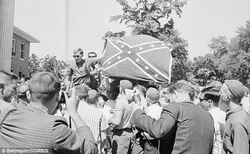 ﻿Supporters of Barnett (Right) show
off their displeasure with Meredith
at the University.
Riots would reach
their pinnacle
on the night of September 30﻿ 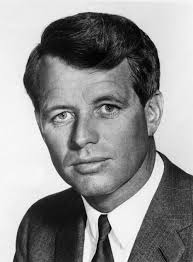 Ross Barnett found himself at odds with Robert Kennedy (left) during the night of the riots. Kennedy was Attorney General of the United States at the time. Kennedy sent 500 U.S. Marshals on the day of Meredith's enrollment. He would then deploy 30,000 troops to Mississippi to put down the "mini-civil war" that was brewing in Oxford at the time. Later after the events at the University Kennedy would visit the campus in 1966. Kennedy gave a speech to more than 6,000 students and faculty. He discussed racial equality and allowed questions about the night of the riots and his role in that night. He garnished laughter from the crowd on several answers including one where he said "James could've gone down to Jackson (the University's other site) and enroll and Barnett would've been left at Oxford astonished. The day after this event Barnett would criticize Kennedy publicly. He said Kennedy was a dangerous man because he had sent tens of thousands of troops to help enroll an unqualified student (Meredith was very qualified and was only denied because of his race) and that he was a danger to the American public.